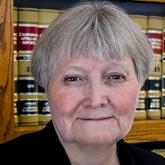 FAY BLIX, a graduate of Western State University College of Law, has been practicing law in Orange County since 1984. She presently devotes the majority of her practice to addressing the legal problems of the elderly and those living with disabilities. She was among the first group of attorneys in the nation to be certified as an elder law attorney by the National Elder Law Foundation in 1995. She is also an accredited attorney by the Department of Veterans Affairs.

The Law Office of Fay Blix is dedicated to assisting the families of persons with disabilities in taking the steps to protect their future.