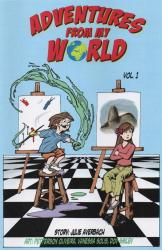 The challenges of being a child with special needs, or the parent of one, are fairly well known and documented.  Less talked about and often ignored is the experience of being the sibling of someone with special needs.  The role can bring with it a confusion of emotions, including frustration, anger, pride, shame, competitiveness, protectiveness, and a sense of having been abandoned in favor of someone with seemingly greater needs.  All of these feelings are explored and dealt with in a new comic book, “Adventures From My World,” conceived and written by a New Jersey teenager named Julie Averbach.

The 20-page comic book presents six illustrated stories of children confronting the challenges of having a sibling with special needs – in all cases a sibling who apparently has autism or developmental difficulties.  Averbach created the story lines and wrote the dialogue, while three students at the Kubert School of Cartoon and Graphic Art share the illustration credits.

In one story, for example, “Abby” worries about how her peers at school will view her when they find out that a new “weird” kid is her brother.  In another, “Max” struggles with tutoring his younger brother on simple math problems while neglecting his own mountain of homework.

Averbach, who is 17 and a high school senior, told Special Needs Answers by email that her goal in creating the comic book was “to encourage siblings to express their emotions more openly, and to feel comforted by the fact that they are not alone. I also sought to create more awareness and compassion in my community about the struggles others face. Finally, I wanted to test the efficacy of the comic book medium as a means of therapy and promoting emotional intelligence.”

“Adventures From My World” had its start as a public service project for the Girl Scouts. Averbach says she was inspired to write it because of both her family experience and volunteering in the special needs community. “Through this exposure, I realized that, in many families, parents must dedicate so many resources to their children with special needs that the emotional needs of the other siblings are overlooked,” she said.

Averbach created the first story at age 14 after reading Marjane Satrapi's Persepolis, a graphic novel that captures a young girl's perspective during and after the Iranian revolution.  At 16, Averbach wrote and sketched the five other stories, then had a local psychologist review them. She also recruited the three student artists (Petterson Oliveira, Vanessa Solis, and Dov Smiley) to bring her drawings to life “in a much more professional and visually appealing format,” she said.

“Adventures From My World” earned Averbach a Gold Award from the Girl Scouts (the equivalent of Eagle Scout status in the Boy Scouts) and on the strength of it she was selected as one of the Girl Scouts’ ten National Young Women of Distinction for 2016.

Averbach is the daughter of Academy of Special Needs Planners member Renee Wainberg-Averbach, who is a financial planner for special needs families at Morgan Stanley in Short Hills, New Jersey.

The comic book is currently being distributed through special needs sibling support groups, hospitals, universities, special needs organizations, learning resource centers, and libraries in 19 U.S. states and four countries.  (It was given out to all attendees of the recent Academy of Special Needs Planners 2017 annual meeting in New Orleans, which is how Special Needs Answers learned of it.)

“I am also hoping that mental health professionals will start to embrace the power of comic books to address other social issues,” Averbach told Special Needs Answers.

For more information about “Adventures From My World” and to order copies, visit www.adventuresfrommyworld.com.  All profits from the comic book will be donated to non-profit organizations supporting individuals with special needs.

As 2019 drew to a close, Congress passed a spending bill that includes significant changes to retirement savings accounts. Fo...

Health Care Reform Offers Something Old, Something New for People With Special Needs

Although it took more than a year of back and forth, a comprehensive health care reform bill and an associated reconciliation...

Can I Administer My Special Needs Trust Without a Lawyer?

What is the best book to buy to help with the administration of a special needs trust?

Health Care Reform Offers Something Old, Something New for People With Special Needs