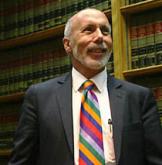 A. Frank Johns was the first North Carolina attorney to earn an LLM, masters in law in Elder Law from Stetson University College of Law (2008), and currently serves on its faculty as an adjunct professor of law. Johns is a leader of the National Academy of Elder Law Attorneys, having served on its Board (1992-2002), as President (1999-2000), Charter Chair of the Carolinas Chapter (1993), Charter Chair of the reorganized North Carolina Chapter (2011), Publications Chair (2010-2012), Editor in Chief of the NAELA Journal (2008-2010) and Steering Committee Chair (2006-2007) and current member of NAELA-CAP (Council of Advanced Practitioners). Johns organized and chaired the North Carolina Bar Association Elder Law Committee (1993), and organized and was the charter chair of the North Carolina Bar Association Elder Law Section Council (1995-1997). Johns also served as a charter member of the North Carolina State Bar Elder Law specialization committee.

He currently serves as Vice President of Senior Resources of Guilford and is the immediate past president of the Greensboro Chapter of the Society of Financial Service Professionals. Along with countless published articles and manuscripts, Johns co-authored Counseling Older Adults (2005), and was a contributing research expert in Why Wills Won't Work (2007).

For over 30 years, we have focused exclusively on guiding vulnerable elders and individuals with disabilities through difficult financial, healthcare, and legal decisions. Our planning is focused on maintaining our client’s quality of life and protecting their hard-earned assets. We offer services in a variety of fields concerning elder law and special needs law, including Estate Planning, Medicaid Planning, Special Needs Trusts Planning, Guardianships, and Estate Administration. If you or a family member need assistance with an elder law matter, please contact us.

Tell us about your special needs issue and we will put you in touch with A. Frank Johns

Tell us about your special needs issue and we will put you in touch with A. Frank Johns