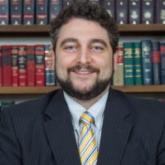 Upon graduation, Antonio worked as an associate attorney with Mirick O’Connell in Worcester, Massachusetts. At Mirick O’Connell, Antonio focused his practice on civil litigation, while also gaining routine exposure to employment law, corporate law, municipal law, land use, and bankruptcy. Antonio has worked on many cases in state and federal courts, as well as administrative matters before various state and federal agencies.

Following his work at Mirick O’Connell, Antonio practiced criminal and civil law working with a number of firms in Massachusetts and Rhode Island. Antonio has drafted numerous motions, pleadings, memoranda and briefs on complex and diverse areas of law ranging from wiretap/cyber-crimes, employment discrimination, eminent domain, and sexual abuse cases. Antonio also published an article on administrative search warrants. Antonio is a member of the Rhode Island Bar Association and the Washington County Bar Association. He is admitted to practice in both Rhode Island and Massachusetts.

Prior to his law career, Antonio specialized in foreign languages and literatures. He holds degrees in Spanish and Italian literature and worked as a graduate teaching assistant for the University of Connecticut.  When he is not working, Antonio enjoys traveling abroad, reading, and spending time outdoors. Antonio spent most of his summers traveling to Spain and Italy. Antonio has also visited Portugal, France, Germany, England, Ireland, the Netherlands, Luxembourg, Belgium, Peru, Canada and South Africa.

The Law Office of Gayle F. Tarzwell is a small, family-run practice concentrating in the areas of estate planning with a particular emphasis on families with children with special needs. As a mother of a child with special needs, Gayle is acutely familiar with the challenges associated with this area.

Tell us about your special needs issue and we will put you in touch with Antonio L. Trubiano

Tell us about your special needs issue and we will put you in touch with Antonio L. Trubiano